Round 3 of the UK Gravity Enduro series was upon us again and this time around riders were descending on Hamsterly forest, up in county Durham.
As the year was rapidly heading into spring, thoughts were on the weather and memories of wall to wall sunshine from this round last year. As we travelled up from Twelve50 Towers on the Friday morning the memories of tan lines and dusty trails seemed a long way off as the horizontal rain over battered the road as we left the M6 and headed east over the moors.
On reaching our grassy clearing for the weekend, the rain had stopped and pockets of blue sky were appearing. Time to get the pits built! 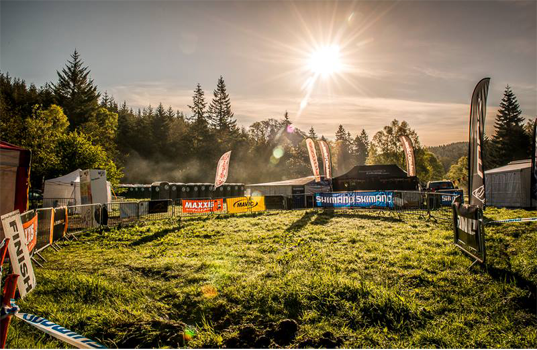 Second season in and we’re getting pretty slick at getting our home built for the weekend, we left Chef Des to get the customary beer can chickens on the bbq and we went out to look at the trails. Stages 2 and 5 where in close proximity to the finish area, so we decided to look at these first.
Stage 2 used the top section of stage 1 from last year so we spent more time scoping out lines on the bottom half, happy with what we’d seen it was off to stage 5. This proved to be the same as last year, not a bad thing, as it’s such a good, fun, fast flowing trail centre shoot. Happy with what we’d seen it was back to the pits to check on the chicken. 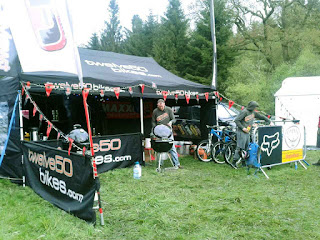 Saturday
We woke to bright blue skies and big smiles, the weather from last year was back and for the first race this year it looked like it was going to stay dry.


After feeding our faces with the Billy Can’s ‘special breakfast’ we headed out for a full route recce. After the 5 hour monster of a loop at the previous round in Innerleithen, the Hamsterley route was going to be more enjoyable. The trails had dried out massively from the day before and were riding so much faster, particularly noticeable on stages 1 and 2 through the wooded sections.
Stage 3 again caused the greatest chin scratching moments of the Saturday sighting lap, the middle section between the two fire roads had a variety of line choices coming into a rocky, rooted, steepish left hander. A wooden stake conveniently placed in the middle of the trail added to the list of obstacles to negotiate. After a few practice runs, some were happy with their line choices, others wanted more runs. Time to split up.
Stage 4 was again very similar to last year, so a quick run down and a little look at the new taped bottom section was all that was needed, most time would be gained or lost on the uphill sprint section, it was clear who was looking forward to this and who wasn’t!
Stage 5 done, it was time to head back to the pits and fuel up for seeding runs. We all made it down the hill in one piece, some more pleased with their times than others but everyone had put in a solid run, so it was time to get our clean on and then feast on the biggest piece of pork known to man. Those brave enough, recreated the shampoo adverts from the nineties by showering under the FREEZING waterfall......... once the ice cream headache had subsided, it felt great to be cleaned up.
Saturday evening saw the usual mix of Des feeding the entire field, Russ continuing to subject us to his ipod playlist whilst we burnt huge quantities of logs in the fire pit........always a good end to a day’s riding.

Sunday
Sunday dawned once again too blue sky and wall to wall sunshine, the trails had dried out even more, making the stages even faster and more enjoyable than yesterday’s practice.
Cheri and Nic headed off to battle the stages first, followed soon after by the old guard of Ross and Russ. Dave, Rick and Ian where next to follow with young gun and guest rider for the weekend Ryan heading out last.
As predicted the stages where running super fast, with even the sections tucked deep into the dense woodland drying out fast. 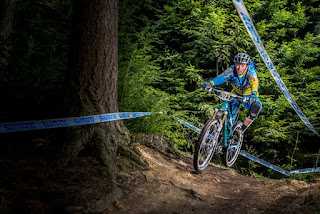 Getting off to a good start is always a priority, calming any nerves and settling into the days racing puts your focus where it needs to be and everyone managed to put a cleanish run together through the root infested and  twisty, tight lines of Stage 1.

The sun was well and truly out now, making the rain, snow and biting cold of the previous rounds a distant memory. Everyone’s spirits were up and the friendly banter amongst competitors was flowing, the day was turning out to be a real good one, epitomising everything that is great about Gravity Enduro racing and UK series.
Stages 2 through to 5 followed suit, pinning the stages whilst riding, walking and chewing the fat with other riders during transitions. We all had tales to tell from our stages, from getting chased by loose dogs on course to close encounters with trees, through to thoughts of taking up extreme knitting and too numerous if’s buts and maybes to mention. Before you know it you’re tearing into the finish area to the dulcet tones of Mr Parr after a great days racing.
Again we all placed solid race results with Cheri just missing out on the podium with a great 4th in Elite Women whilst Nic bagged herself a creditable 8th in the closely contested women’s cat.
Us boys also placed well with Dave again getting inside the top ten with a solid 8th followed by Rick in 16th and Sidey in 54th, good solid riding in the huge category of Masters.
The old boys of Russ and Ross duelled it out in the Vets cat, with Russ just coming out on top with a great days riding to finish 14th with Ross just two places back in 16th and with only 9 seconds separating them over 6 stages and just over 2 hours of timed racing.
Faster rider of the weekend though came from Twelve50 guest star Ryan Dutton, after constantly fretting and worrying about how much quicker he could have gone, Ryan grabbed a brilliant 5th place in Seniors, posting a time quicker than some of the Elite Men.
............however on this occasion the day was most certainly not over yet!

Des, Cheri, Nic, Ross and Russ headed part way back up Stage 5 to cheer on the remaining riders still racing, We found ourselves a great spot on the outside of a raised berm and set about cheering on every remaining rider to come past......Things quickly developed though when a marshal who happened to have a rider list, provided us with the names of the riders as they approached. A very bespoke and individual shout of encouragement ensued for every rider that clearly surprised some when they momentarily turned their gaze to us rather than the exit to the berm. With a supporting orchestra of air horns and mini trumpets  the noise was starting to attract more followers, as the crowd grew we added in the obligatory Mexican wave, which morphed into choreographed arm pointing, ground slapping and ultimately Gangnam Style! ........By this we had recruited about 60 more supports and Twelve50 rent-a-crowd was in full swing, even the dogs were joining in.

Last down the hill were the Elites who all got the same level of crowd support, even though voices at this point where starting to suffer.  Neil Donoghue, series leader and winner of this round gave us a big thumb up in the finish area for the support. 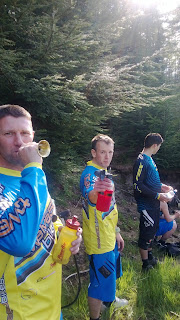 It brought to an end what was a great weekend, probably the best so far from the UKGE series, all that was left was to strip down the pits, congratulated the podium places and make the trek home, reliving tales from stages and the now legendary crowd participation.

Big, big thanks to all of our sponsors, Fox Europe, Mavic, Osprey, Renthal, Fibrax, Powerbar, Maxxis and Weber.
Thanks also to Steve Parr and his team for another fantastic event. Gravity Enduro really is going from strength to strength in the UK right now.