By Twelve50 Bikes - March 30, 2012
Gravity Enduro is one of the newest forms of MTB racing, and suits all kinds of riders, from the super fit XC whippets to the retired DH racers! It really is an amazing new variation of our brilliant sport.
Where do I start.... Well I guess at the shop really!!
With a full weekend of racing ahead at the UK Gravity Enduro Series for the team, the van and all the spare parts, tools and kit needed to be organised..... That killed half a day!
By Friday night we were all up in Scotland, Russ and Ryan were up there early and had the Job of setting up the race pits, and a great job they did too (Although we need some more heavy duty pegs now!)
And big thanks to the burger stall guy for letting us plug into their generator for the power for the flood lights!!
After a quick unpack and a late night feed in our uber cool Eco House Tantah Croft
it was off to bed for a good kip!
Saturday..... Practice and qualifying! 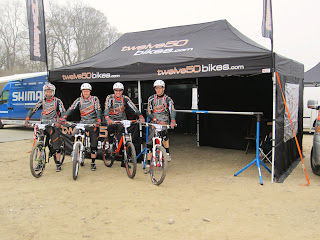 Of we went on our merry way up to Stage 1. A decision was made to skip Stage 1 and do it later on when we went back past, this decision haunted us a bit (More about this later!), and so we went on and headed for Stage 2!!
What can I say, Stage 2 was greasy, slippy, rocky and rooty and not very downward facing at the top. After the first section, it breaks out onto a fire road and time for a breather.....
Over the fire road and into the loam to come, great fun section ahead, loose loamy turns made the new Conti Rubber Queens earn their keep! And then a final sprint uphill and down into the quarry finish!!
Onwards to Stage 3..... Only 45 minutes of climbing up the red XC route for us! Boy oh boy what a treat this stage was, rocky, off camber and twisty at the top, plenty of cheeky line options to be had, nothing outside the tapes though!! After that followed a fire road sprint to get the legs burning before hitting some nice wide, steep, fast and loose descents towards the finish.
Another nice long ascent ahead, we were all fuelled up and ready to go.....
With the constant cry of "Knock it back a cog" from Sergent Cosh, reminding us we were pushing on a bit too quick!
Stage 4 was a great stage, techy start with loads of loam and rocks n roots, super fast mid section on the trail centre stuff and a finish on an amazingly steep an tech descent, this was one of those "Balls win prizes"
sections!!
Stage 4 done, now for the long long fire road climb up to Stage 5, and also the qualifier stage for later that day!
After 40 mins we were ready to rock, what a riot, this is a top stage!
Quick blast into the quarry and then down into the "Tunnel" flat out speed required here, before hitting consecutive fast corners flat out. Then onto the fire road for a long sprint into the lower section. Super fast sweeping turns and jumps left us with smiles into the finish arena, and very weary legs.

Time for big feed at the pits (Only two hours before qualifying) We had to make an emergency trip back to the house because Ian and Ryan (Soon to have note pads and lists tied around their necks) had forgotten some essentials!!
Fed, watered, and watered again and again....... it was so hot you just dripped your energy out!!
With an hour to go, everyone got their race faces on, kitted up, stopped speaking much and one by one, we headed up the hill to qualify. One balls out fast as you can run on the quickest and most fun stage of the course.
I'd like to say it went well for us all, but it didn't....... Ian had a mechanical problem with the chain device, and Russ blew his tyre off the rim landing a jump, resulting in a running finish for him, and a trip to the medic tent for a patch up on his knee..... 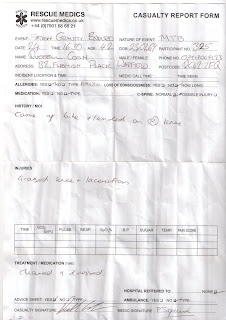 Myself and Ryan did ok, a few mistakes and tired legs but we made it down in one piece. Ryan was 19th in Seniors and I was 22nd in Masters (The biggest category at 102 qualified)
Time for a warm down and Russ got the BBQ fired up, Beer Can Chicken for us!! In the meantime, Ian and myself decided a quick massage wouldn't do any harm to help the legs, turns out they really hurt! However, worth every penny (Cheers Sally)
With the Beer Can Chickens ready and the smell wafting through the pit's it wasn't long before we had a group of hungry racers gathered around, even Jerome Clementz was taking photo's of the amazing feast we had!! (Next time you can have a buttie Jerome, and we will also have Ribs!!)
After we were all stuffed, it was back to the house to relax and prep for race day!! Me and Ian decided a bottle of red and some cheese was a good idea!! Russ voted for custard creams and Ryan went for toast!
RACE DAY......
Up at 06:00.............. and off to the venue after a crammed breakfast. Russ made us all chicken butties with the leftover chicken we had from the BBQ! (Cheers Dad)
All the bikes got a once over, Ian had new cranks and chainring and then it was time to wave goodbye to Russ (Being old he was first off!!) Then it was time for the rest of us to kit up and move out.......
Stage 1, this will haunt us all..... the one we didn't practice, and we certainly should have!! After a gruelling day in practice and listening to people say "It's one line down, nice and flowy" we decided to rest and race blind.......MISTAKE!! It was steep, rooty and tech!!
As the stages flowed and the hours and climbs rolled by, we were all having our own drama's. More than anyone was Ian, again suffering with chain issues on every stage, not a good day at all....
And to top it all, there were problems with transition times being too short for 2 to 3 and then timing kit problems meaning people were all over the place.
At this point I have to say, this was a great days riding even without being timed! Riding between stages and making new friends and sharing stories of line choices and mishaps, everyone was in good spirits and having a good laugh. Not sure how much the glorious sunshine helped this??!!
Stage 5, what can I say..... a bit of a farce with the timing. Other stages put back by up to 15-20 mins and this stage was only put back 5mins meaning people were missing stage starts!!
However, what a way to finish the day, cracking run down here this time, no mistakes, no corners blown out and hit all the lines! I managed to shave 6 seconds off my quali time which was cool....
Back in the pits, the stories and banter started....... but we were still missing a rider.... Ian! He had missed his start time on Stage 5 and been held back until after number one seed Jerome Clementz had started. It would appear our wait wasn't one for good news, Ian had yet more bad luck on his final run and came into the pit's having run half the stage with a snapped chain....... 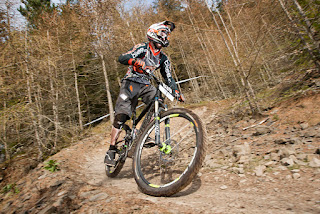 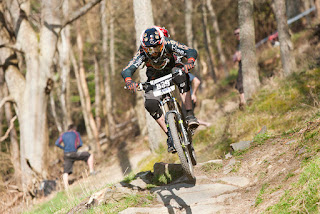 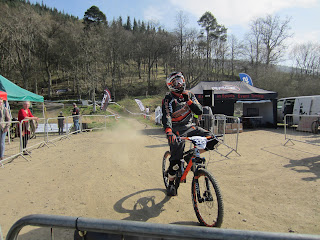 After packing the pits up and consoling Ian as much as we could, it was time for the long trip back home. Time to say goodbye to the hill that had killed us all...... 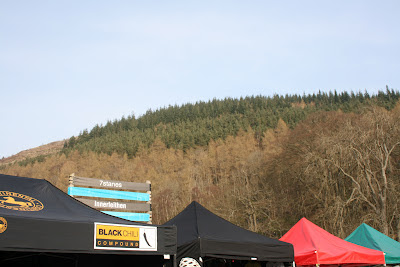 What can I say to sum up the weekend........ Can't wait for Coed-Y-Brenin!! Big thanks to Steve Parr for the event, and sorting the timing issues out, hopefully the timing company don't balls up the next event.
We met loads of top people, and had a laugh all weekend.......
A few thanks going out.......
Mike at Tantah Croft Eco House, you were a star for lighting the fire both nights!
Rob Scullion at Continental Tyres for the excellent grip we had all weekend.
Sophie at Osprey Hydraulics for the amazing packs that kept us hydrated.
Fox for all our cool kit!!
And of course Steve Parr for organising the event (And all the marshalls and support crew & medics!!)
Also, massive thanks to the guys capturing the weekends action for everyone:-  JT Media for shooting the video and taking photo's and a BIG SHOUT out to Ian Linton for all the cracking pictures he managed to get.
It's hard to describe to people an event like this but these guys got some awesome footage and shots to help us show you all goes on. See you at the next round guys.....
Here a is a link to the video that JT Media did....... hopefully we will have our own segment next time...... VIDEO
Hope you enjoyed reading my little Blog of the event, if you do have any questions about it, feel free to ask and will try and get back to you ASAP!!
Matt
Continental Tyres Cube Fritzz Pro Cube Stereo 2012 Fox Head Europe Ian Linton Photography. JT Media NukeProof Mega Osprey Hydraulics Tantah Croft Twelve50 Bikes UK Gravity Enduro