By Twelve50 Bikes - June 19, 2013
Hot off the press, here is some info on the all new Mavic Enduro Crossmax wheel and tyre combo!!
We all know Mavic make some of the best wheels for both MTB and Road, and now they have come up trumps with this brand new wheelset for Enduro riding/racing.
We can't wait to get our grubby paws on some, until then though, here's a recent article on them from Dirt Mag.....

Mavic have been making wheels for what seems an eternity, they’ve been around since 1889, developing their first MTB rim in 1985, and they’ve become one of the largest MTB wheel companies in the world. With all that experience gained they’ve finally decided to branch out and new for 2013/14 they give us the Enduro Crossmax – Wheel Tire System. Yes that’s right, not only are Mavic making wheels they have branched out into tyres too! This ‘system’ (as in the wheel and tyre) has been specifically designed for enduro racing and they’ve had great feedback from enduro racers Jerome Clementz and Anne-Caroline Chausson, who have apparently been working very closely with the team at Mavic to ensure they have the best product for enduro racing.

The idea started at the drawing board (like every good idea does), where the team decided exactly what attributes they wanted the system to have. According to Mavic, they agreed that front and rear wheels need to be different, ultimately because they have two very different jobs, and this is where they established what they wanted from each wheel:
Front:
Grip, Stability, Handling, Comfort
Rear:
Responsiveness, Rolling, Traction

And of course on top of all that they needed to make something lightweight and strong. Mavic had all these things to achieve, and produced a wheel and tyre that on first impressions does a very good job of ticking the boxes…
The new Crossmax wheel is available in 26″ and 650b, but there is no 29″, the reason being that the Mavic team think that enduro races will be predominately fought on 26″ and 650b wheels. 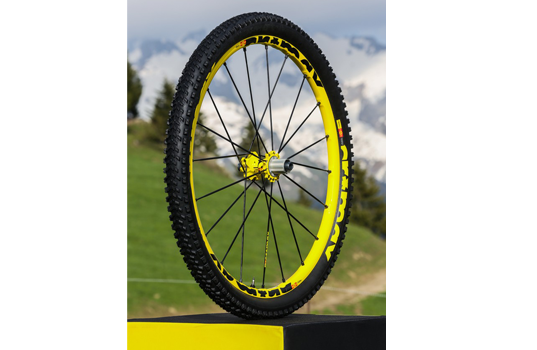 Mavic have chosen to make the new wheels from aluminium instead of carbon: they don’t believe that there is enough of a reason to start using carbon. To save some extra weight Mavic use inner-spoke milling. There isn’t too much of an issue with weight as these wheels aren’t heavy by any stretch of the imagination, tipping the scales at 1660g (26″) and 1710g (650b) for the pair

- Front
The spokes are mounted in such a way that there isn’t any need to drill all the way through the rim, there are 24 straight pull spokes, which are cross-laced, which Mavic say is for stiffness and comfort. As Mavic are producing a tyre for a specific wheel, they are able to make the two work together. The rim width is 21c and the tyre is a 2.4, which allows the tyre to take the ideal shape.
-Rear
The rear wheel spokes are mounted in the same way as on the front to keep the strength of the rim. There are only 20 spokes, however they are laced in Mavic’s ‘Isopulse’ system, which is supposed to keep strength under a lot of force. 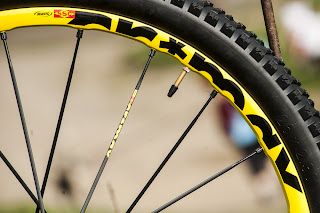 Not only do Mavic make amazing wheels, they make some pretty damn good tyres as well, and they have developed two new tyres just for the enduro discipline, the Charge and the Roam XL..... 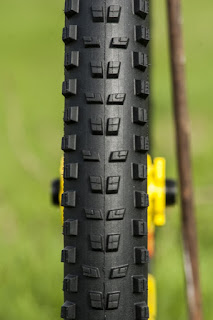 The tyre is made up of a very soft, slow rebound 40a rubber compound and is tubeless ready. The tread pattern has a lot of space for mud clearance with the outer knobs raised quite high to allow for a smoother transition whilst cornering. We were able to ride this tyre in a couple of different locations, and I found it to perform extremely well in mud, on slick roots and in dust too. So that’s a thumbs up. It held itself on corners, and under heavy braking in some not-too-friendly environments. 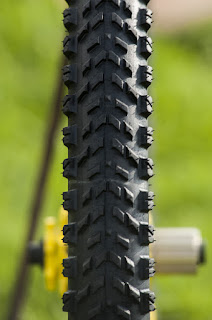 The rear is dual compound: On the inside is a firm 60a and on the outer is slightly softer 50a, to offer a little more grip in the corners. The rear tyre has been designed with pedalling in mind and for that reason it has much shallower knobs, which when combined with the harder compound makes for a faster rolling tyre.
Here's a nice little video of one of the wheels in action......